Hugh Dudley Auchincloss, III was born in 1927 and has been a resident of Newport for all or part of each year since that time. Educated at Groton and Yale he developed a lifelong interest in the culture of the Middle East. Mr. Auchincloss served as a Marine in both World War II and the Korean War. Following his military service he studied at the American University in Beirut, and many of the books in the Middle East Book Collection, that were donated to the Pell Center of International Relations at Salve Regina, date from that time. 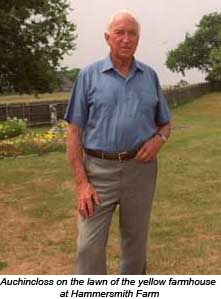 His understanding of the Middle East and his ability to speak Arabic led to a job with the World Bank and the Aswan Dam project in Egypt. Mr. Auchincloss had a brief but distinguished diplomatic career. In 1961, he served as a liaison officer of the United States Delegation to the United Nations and in 1961-1962 was an advisor to the U.S. Permanent Mission. He worked for many years in New York City as a Management Consultant before retiring to Newport. In 1988 Mr. Auchincloss received a Master's Degree in International Relations from Salve Regina.

Mr. Auchincloss was the step brother of Jacqueline Kennedy Onassis.